You’ve Got It, I Believe In You, Hangin Tough, Step By Step, and Let’s Try Again…running mantras – nope NKOTB songs! So that reference pretty much dates me. I grew up in LOVE with this group and yes they are a regular on my training playlist. For you youngsters this was they were the original boy group. Blazing the trail for all others to follow. They didn’t break the rules, they made them.  Ready to make the leap from fandom to trail running?  Here goes nothing…

I consider myself a newbie trail runner.  I am the 1st to admit when I am out of my comfort zone and way in over my head.  This year I began to branch out into from road races to the world of trail running.  To say I was terrified was an understatement!  Prior to spring 2016 I had run a few trail events and by “few” I mean 3.  I train on the Anhapee State Trail near my home, but it is by no means a technical trail. To put things in perspective I did not even know what the word “technical” truly meant in terms of trails when I began signing up for 2016 events.  When the Trailbreaker Marathon rolled around I was in great shape for road events, but was not prepared for the beat down I was about to take at this race.  My lack of knowledge was a run awaking to say the least! Hence my need to figure out how to get my butt in shape for the adventures I was about to undertake come May-August.  1st of which the famed Ice Age Trail in May.  I was to tackle the 50k, but was in no way ready or did I even know where to begin to prep myself…enter folks at nurun co.

“The trails will bring us together, but the people will keep us together.” – Mark Garrigan

Nurun co. is the brain child of Mark Garrigan and his wife Katelyn. In the day and age of #relationshipgoals these two set the bar high.  Watching them work together at the High Cliff Ultra in August it was clear they are a power couple that works hard, but also can get the party started at any post race party.  Their dedication and pure joy they bring the sport of running is awe-inspiring.

When I began to build my training schedule for the Fall 50 in October with my coach Nora Bird (teambirdtraining.com) we took a look at the High Cliff Ultra and both agreed it would be a great race to assess where I my fitness level was at the end of summer.  I threw a few questions out on the Facebook page for the event and was immediately answered.  Impressive to say the least! I was nervous to take on such a technical course, but was amazed at how quickly individuals who support Mark’s event jumped in and helped with advice.  It is a true testament to you as a runner to have friends that will go the extra mile, no pun intended.  By the time the event rolled around I felt like I was well prepared and ready to rock.  Getting out of my car I was greeted by all my “new” friends who I had communicated with prior to the race. Walking over the start there was a sense of community and support like I had never felt before in road racing.  Make no mistake the chill atmosphere created an awesome vibe, but the organization of the race was spot on.  Mark did a bang up job from start to finish.  After the race we got to chatting and he mentioned that big things were on the horizon for nurun co. 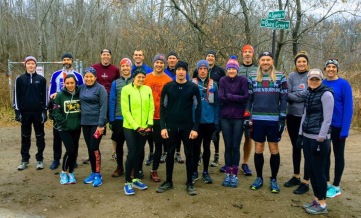 Fast forward to Black Friday and he was not kidding! This fun run was the launch for nurun co. as a primer running company designed to bring runners together to experience the exhileration of trail running in a multitude of ways.  Jump on the website you will find that the group offers races: High Cliff Ultra 25k & 50k (August 5, 2017) and Black River Ultra (October 28, 2017), repeats: Tuesday Runs 5:30pm at Baird Creek, and fun runs: Black Friday.  Nurun.co is bringing trail running to new heights in Wisconsin and offering newbies like myself a comfortable, welcoming place to cut our teeth and try something new.  There motto says it all:  People. Trails. Together.  Not a bad way to approach life!

I owe this crazy group a ton of thanks for helping me transition into trail and ultra running.  2017 is going to be EPIC and that is due in part to the guidance and support I have found from the folks that hang with nurun co.  Come join a race, repeat, or fun run in 2017, I promise you will not not be sorry you did.  The trails are calling…time to lace up and get outside.  Also, head over to the nurun co.’s Facebook page and “Like” & “Follow” them for updated information on upcoming events.  Registration for the High Cliff Ultra will open in January 2017.